The U.S. military conducted an airstrike against Al-Qaeda affiliated Al-Shabaab jihadists on Tuesday, the first airstrike in the country since President Joe Biden took office

The U.S. military conducted an airstrike against Al-Qaeda affiliated Al-Shabaab jihadists on Tuesday, the first airstrike in the country since President Joe Biden took office, the Pentagon said.

The US military command for Africa (AFRICOM), in coordination with the Somali government, ‘conducted one air strike in the vicinity of Galkayo, Somalia today against al-Shabaab,’ Pentagon spokeswoman Cindi King told AFP.

A battle-damage assessment is still pending due to the ongoing engagement between al-Shabaab and Somali forces, however the command’s initial assessment is that no civilians were injured or killed as a result of this strike,’ she added. 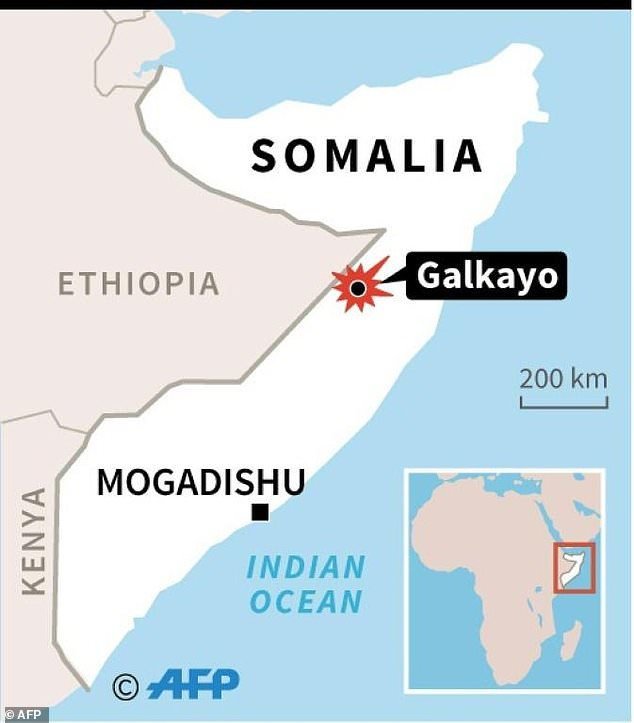 Map locating Galkayo in Somalia, where the US military conducted an air strike targeting Al-Shabaab militants

The strike is the first conducted by the U.S. military in Somalia since January 19, when AFRICOM announced it had killed three Shabaab jihadists in two strikes in Jamaame and Deb Scinnele.

Biden was inaugurated the next day. As soon as he arrived at the White House, he limited the use of drones against jihadist groups outside US theaters of war.

That reversed the policy of his predecessor Donald Trump, who had given the US military carte blanche in countries such as Somalia and Libya.

In March, Pentagon spokesman John Kirby said that any planned strikes against jihadist groups outside Afghanistan, Syria and Iraq were now submitted to the White House before being carried out.

Drone strikes multiplied during Trump’s term, going from 11 in Somalia in 2015, to 64 in 2019 and 54 in 2020, according to the non-governmental group Airwars, which monitors civilian deaths in bombings around the world.

Just before he left office, Trump ordered the withdrawal of some 700 special forces soldiers who were deployed in Somalia to train and advise the Somali army.

The Al-Qaeda-linked group Al-Shabaab has been fighting to overthrow the federal government since 2007 and frequently attacks government, security and civilian targets.

Somalia’s Al-Shabaab jihadists have warned politicians against taking part in elections due to kick off this month after months of deadlock and delays. 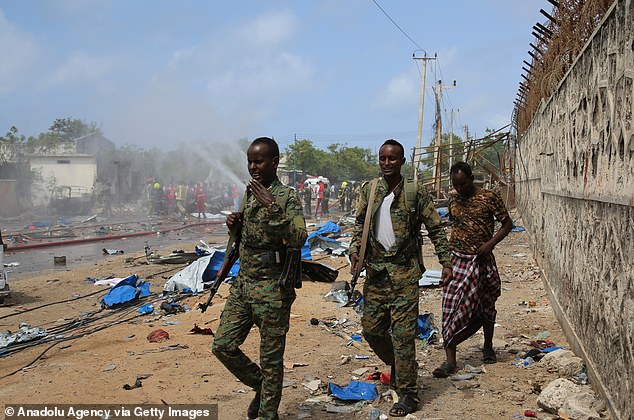 Security forces inspect at the site after a bomb exploded near a police convoy in the Somali capital of Mogadishu on July 10, 2021. Regional police chief Farhan Qarole escapes unhurt

Indirect parliamentary and presidential polls are due to open on July 25 with four days of voting for the upper house by state delegates.

‘We are sending… a warning to the (voting) delegations,’ Ubaidah said in a rare message issued Monday to mark the Muslim festival of Eid al-Adha that was circulated on pro-Shabaab websites.

‘Don’t get fooled by the empty promises… including the provision of money, and the promise that the voting will be secret.

‘Learn from those before you,’ he said, in an apparent reference to traditional elders who took part in the last elections in 2016, some of whom were targeted and assassinated by Al-Shabaab fighters in the ensuing years.

Ubaidah’s whereabouts are not known, and it was not clear when the message was recorded. AFP could not independently confirm the identity of the voice.

Flydubai to operate flights to Hargeisa from August 10

U Nyan Win, a Lawyer for Aung San Suu Kyi, Dies of Covid