Getting to grips with CBDC

We have been hearing about Central Bank Digital Currency (CBDC) on an almost daily basis. Jesper Domargård from IDEMIA explains CBDC in very simple terms, together with what kind of ‘financial animal’ CBCD is.

Furthermore, he will focus on why it has been grabbing so many headlines lately as well as some of its major potential implications for the financial eco-system.

Why CBDC and why now?

The past few years have witnessed many innovations designed to revolutionise money. First, in 2009, Bitcoin offered a vision of money free from any centralising authority, managed instead by computer code and algorithms. However, it continues to be subject to massive volatility, preventing it from becoming a means of exchange for the masses. This is precisely the reason why the private sector came up with ‘stablecoins’, the most emblematic being Facebook’s now-defunct cryptocurrency Diem.

Faced with this new competition, central banks, which have traditionally been responsible for issuing currency could not just sit on their hands and they began working on central bank digital currency, with the promise of delivering an innovative, digital form of cash (e-cash) with all the guarantees of money that is actually issued by a central bank. This is a massive initiative and ‘two-thirds of central banks consider that they may issue retail CBDC in either the short- or medium-term’ according to the Bank for International Settlements (BIS).

Another factor that has probably made central banks intensify their CBDC efforts is the rapid decrease in the use of cash in different parts of the world. Today, unbanked populations—and there is a significant unbanked population even in the most developed parts of the world—participate in the economy by getting paid in and paying with cash, making them completely dependent upon cash. But in a future where cash has disappeared from use, these populations will be completely excluded from the economy. However, if there was an electronic form of cash – e-cash – that citizens could access and use without having a bank account (in the same way they can access physical cash without having a bank account today), these populations could continue to participate in an economy without physical cash.

How does CBDC differ from stablecoin and tokens like Bitcoin? 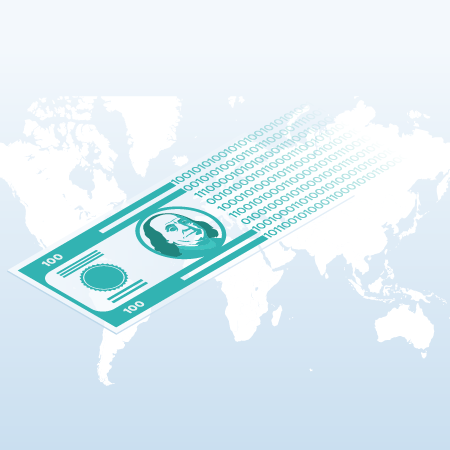 Let’s continue our Central Bank Digital Currency journey by comparing it to stablecoins and tokens like Bitcoin. The key distinctions here are liability and stability:

How could CBDC impact commercial banking?

Another potential impact of CBDC could be the financing of commercial bank loans. A commercial bank typically uses deposits to extend loans to its customers. This is the fractional reserve system, responsible for the bulk of money created in our economies. However, there is a risk that when CBDCs are introduced, consumers will prefer to hold their deposits in this new form of e-cash rather than with banks. This would mean that commercial bank balance sheets would be reduced by the amount of present-day deposits that will be ‘replaced by’ CBDC/e-cash in the future. This in turn would mean less credit – or more expensive credit – and have a serious impact on the economy. Central banks are very much aware of this issue and are factoring it into their design, for example by ensuring that CBDC bears no interest, or by limiting the maximum amount an individual can hold to prevent disintermediation from occurring.

CBDC as a public good

The originality of CBDC, issued by the central bank, is its public money nature. Compared to money not issued by a central authority, or commercial money, CBDC is a public good, serving the public interest. This means that it should function as an instrument of sovereignty and foster financial inclusion everywhere, both in developed and emerging economies; no one should be left behind and e-cash should be made available to everyone, regardless of wealth or degree of tech literacy. CBDC can also facilitate government initiatives to distribute benefits or stimulus payments. By harnessing the benefits of programmable money, it can choose to issue cash that may only be used at certain merchants, or for a certain time.

The payment guru Dave Birch often makes this important claim. A key characteristic of cash today is that you can transact anywhere, anytime. Whereas other means of payment may fail due to a system outage or a lack of network coverage – or worse, a natural disaster – cash cannot fail. Users know they can transact freely at any time. All central banks agree that CBDC must replicate this key feature and are working on tech solutions to ensure ironclad security for offline transactions while preventing unauthorised money creation or double-spending.

The number one concern raised by people and businesses around the world is how a CBDC system can protect privacy. Cash today is anonymous. Fortunately, there are a number of tech solutions available to solve this issue. First, in a CBDC intermediated model, the central bank would not have visibility over individual transactions and balances, and only the user’s commercial bank would have access to this information. Second, there are technological ways of achieving complete anonymity and preventing any traceability for smaller amounts, if central banks so choose. This would allow them to ‘grandfather’ this benefit of cash for limited amounts, striking the right balance between privacy and combating money laundering. Researchers are also exploring even more efficient innovative techniques for protecting privacy, such as zero-knowledge proofs.

CBDC and the future of payments

With 90% of the world’s central banks exploring CBDCs, the potential implications for the current financial ecosystem are massive. Today, we use a plethora of payment solutions day in, day out, and it seems fair to assume that we will also use various types of currencies in the future. We hope that this short article has ‘demystified’ CBDC a little as we rush headlong towards the banking and payment systems of the future.

Jesper has a genuine background from different parts of the payments ecosystem and held various senior roles with Visa and Worldline prior to joining IDEMIA. Responsible for marketing IDEMIA’s global payment offering, Jesper is a frequent speaker at different events and holds an MSc in Business administration from the University of Linköping, Sweden.

As the leader in identity technologies, IDEMIA is on a mission to unlock the world and make it safer. Backed by cutting-edge R&D, IDEMIA provides unique technologies, underpinned by long-standing expertise in biometrics, cryptography, data analytics, systems, and smart devices.

IDEMIA offers its public and private customers payment, connectivity, access control, travel, identity, and public security solutions. Every day, around the world, IDEMIA secures billions of interactions in the physical and digital worlds.

With nearly 15,000 employees, IDEMIA is trusted by over 600 governmental organisations and more than 2,300 enterprises spread over 180 countries, with an impactful, ethical, and socially responsible approach. For more information, visit www.idemia.comand follow @IDEMIAGroup on Twitter.